Mr. Coyote was getting very old and had to be more careful for his own safety. He had been walking for hours and hours through a beautiful valley when he came upon a large tree. Mr. Coyote was very tired and wanted to rest but he also needed to be safe. He kindly asked the tree, “Please open up so I can rest safely in your care”. 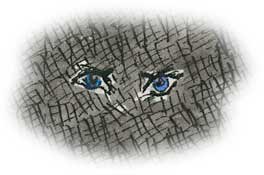 The tree opened up so that Mr. Coyote could go inside to rest, then it closed to keep him safe. Mr. Coyote slept for hours. When he woke up he could not remember what he had said to make the tree open. He said, “Let me out Mr. Tree”, but nothing happened. He said, “Please let me out now!” and again nothing happened. The tree didn’t even creak. Mr. Coyote knocked on the tree, but it would not open up. Mr. Tree was upset with Mr. Coyote for not having said please the first time he spoke to the tree! It let him rest a little longer. 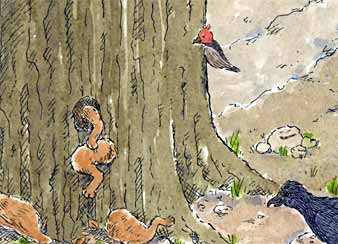 Mr. Coyote decided to take off his arms one at a time and put them through the small hole. He then put his legs through one at a time by taking them off. He put his body through by taking it off. This was working out fine. I’ll show you Mr. Tree, you can’t keep me in here, he thought. 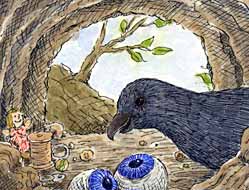 Mr. Raven saw the eyes and flew down to take them. Then Mr. Raven flew back up high in the tree with Mr. Coyote’s eyes. They were such beautiful eyes, blue like the sky, and would be a treasure to put in his hiding spot! 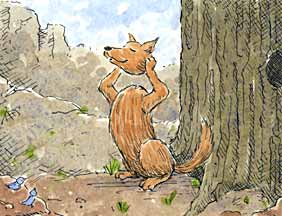 Mr. Coyote finally put his head through the hole. He then put himself back together. One piece at a time he became a whole coyote again. But after he put his head on he could not find his eyes. He was feeling all over. His ears were listening to hear him touch his eyes, but not a sound could be heard from his eyes. His fingers were being careful while feeling around, but still no eyes were found.

Mr. Coyote knew he could not let the animals know he was blind. He felt his way to a wild rose bush; he then put two rose petals in for his eyes. This would cover the blindness for a little while, but he would have to keep looking for his eyes. Surely they were close by! 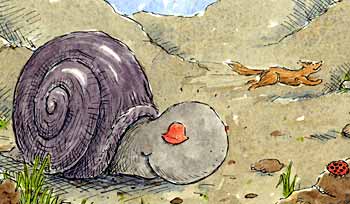 Mr. Coyote said, “Because they are very beautiful. They have lovely colors. You can try them if you want and I will hold your eyes.”

Mr. Snail took off his eyes. He put them into Mr. Coyote’s hands and tried the rose petals in his eyes. Then Mr. Coyote put Mr. Snail’s eyes into his head and ran off with his long tail wagging.

To this day Mr. Snail is crawling with his head down looking for his eyes. And all coyotes have brown eyes instead of blue; this is because Mr. Coyote was naughty when he took Mr. Snail’s eyes. And Mr. Raven still has those beautiful blue eyes in his secret hiding place, but he cannot return them because the secret hiding place was so secret not even Mr. Raven can find it!